Development is used for everything regarding the game development, and scrapped content from the final product.

In the games files, there is a character portrait from the arcade version of a man unseen in the final carnation of the game along with early spelling of characters names--including some that went unused all together.

Seiichi Ishii, Ehrgiez's director, had previously taken on the role of director for the Tekken series. Bringing relevance to two of the unused name tiles in the games data, Heihachi and Devil as they are both prominent characters in the Tekken series.

Being that the games arcade and console releases were not published by the same company but rather two, Namco and Square, it could be theorized that either Namco would not allow use of characters from Tekken or that Square would be the disallowing party, as the use of Final Fantasy characters to be featured in the game were IP's granted to DreamFactory by Square, assumably making Square right holders of the game, and giving them creative say of the games direction or, similarly, it could have been viewed as a conflict of interest to merge both universes in a third party developed game rather than a collaboration, causing development of Tekken characters to cease. The presence of the unused name tiles suggest the it was scrapped in the earlier stages of development as there are no accompanying character portraits.

There exists images featuring an "unused" character. Though the character did not make the roster for the final releases of Ehrgeiz, it appears as though he was in existence in the latter stages of development as evidenced by the stage being the final version rather than the beta and Lee's character looks exactly as he did in the final releases.

It is suggested the mysterious blonde man was originally intended to be Godhand.

Captions for the below images on the now defunct Ehrgeiz sight label the man as Godhand. The two also share a similar manner of dress.

Also, as seen in the images down below, Godhand underwent great change before his final incarnation. It just so happens that the third costume of Godhand bears a VERY close resemblance to some of his earlier developments as you can see down below:

Second costume of ? has still some Ill Goga code leftovers from the Tobal 2 base. When using cheatcodes to play as ? second outfit, which technically doesn't exist itself, the victory animation takes the form of Ill Goga.

A female character named Rio (as seen in several images featured throughout this article) was 'alive' in the earliest stages of development but was ultimately scrapped. Following Ehrgeiz's debut and the Jamma show in September 1997 it was stated that user feedback would be used in consideration with the subsequent development of the title and all game assets were subject to change as a result. However many of Rio's assets were "recycled" with other female characters in terms of appearance and moveset. Namely Clair and Yoko. And Rio remains as a character slot even in the final product, though unused, through the dog character from Tobal 2 who seemingly was meant to play a larger role at some point given it's prominence in the game and surivival to the next Dream Factory developed title (Ehrgeiz)

In addition to the unused stage icons, there is also an unused map marker from the arcade version reading "BABEL". Within one of the Japanese game guides the computer stage is labeled as Babel.

Below is a screenshot of Jo and Doza/Naseem in the beta version of the shelter.

Images of game play from demo/removed stages from the game. It appears developers tried to simulate an audience outside of the ring in the stage featuring a house and is seen, though less clearly, through the initial datamined image from the games disk itself. Further down there is an even earlier concept of the stage that originally, had no occupants on site.

Early promotional posters for Ehrgeiz feature two characters unseen in the final cut of the game. Though remnants of the two remain in one sense or another.

Godhand underwent a drastic change of appearance and Nazime is Prince Doza/Naseem. The characters have similar names and appearances.

It is also worth noting that within the game's file, Doza/Naseem's ending is labeled as "NAZ20.STR", retaining the letters of 'Nazime'.

The game as it appeared on the JAMMA '97. Naseem's name was fixed. The character selection screen shows a 3D model of the selected character, which makes a pose when selected. 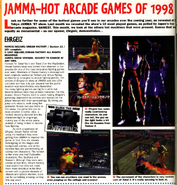 There are several, presumably place holder, images in the games files. One of them being what looks like a man in tattered clothes with boxing gloves holding a chainsaw.

Also in the games files is unused texted that suggests that at some point in development multiple games modes were planned for the title. The font of the text is that of the game when in the very early stages of development.

It is also worth noting that the numbers "#99" and "#100" were lumped in with the text. As Ehrgeiz was built off of Tobal and the game does retain many leftovers from it, it suggests that early on, Ehrgeiz could have been worked on as a sequel to Tobal 2. As the numbers 99 and 100 have no relevance in Ehrgeiz but rather Tobal, as the previous titles tournament were it's 98th. and 99th and the early version of Ehrgeiz could have been it's 100th 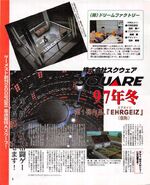 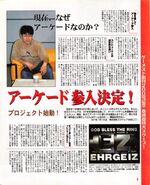 Sasuke Concept
Add a photo to this gallery
Retrieved from "https://ehrgeiz.fandom.com/wiki/Development?oldid=4675"
Community content is available under CC-BY-SA unless otherwise noted.